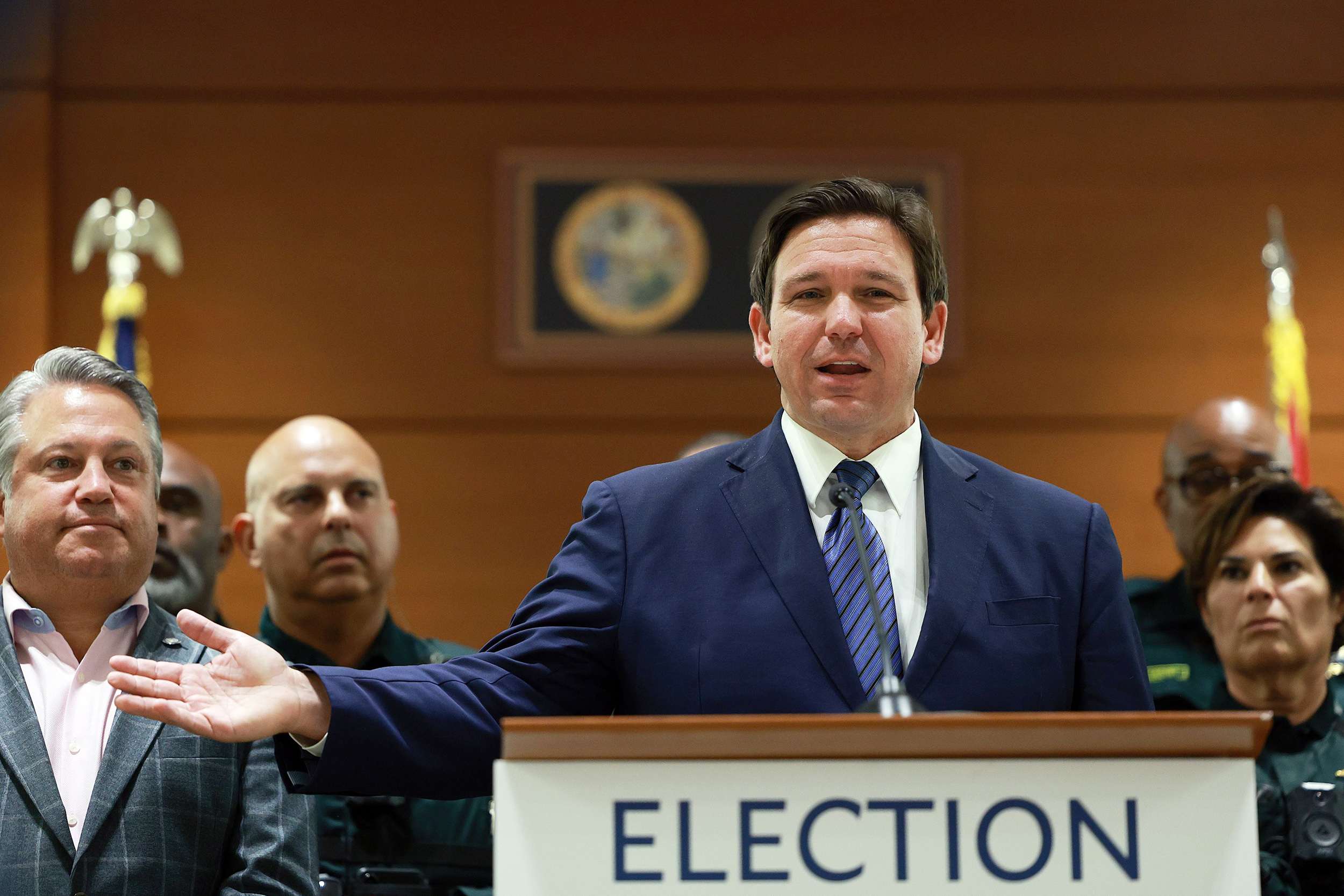 While his speeches were ostensibly on behalf of the candidates there, they offered a window into what a DeSantis presidential bid — a frequently speculated possibility, especially if and when former President Donald Trump steps aside — could look like.

Inside packed ballrooms in Pittsburgh and here near Youngstown, Ohio, DeSantis rallied for Doug Mastriano, the Republican nominee for governor in Pennsylvania, and J.D. Vance, the GOP Senate hopeful in neighboring Ohio. In Pennsylvania, DeSantis put his spin on a famous World War II address by British Prime Minister Winston Churchill.

The events — part of a tour sponsored by Turning Point Action, an emerging conservative grassroots juggernaut — are aimed at uniting the party behind a slate of right-wing candidates endorsed by Trump. All of the candidates DeSantis has backed advanced from bruising primaries and have faced backlash from some Republicans in their states, including Kari Lake and Blake Masters, the GOP nominees for governor and Senate in Arizona he hit the stump for earlier this week.

“There’s primaries, people support one candidate or another and that’s fine. But once that’s over, it’s important that all Republicans get on board and support our governor candidates,” DeSantis said in Pittsburgh, adding that it’s “very important” for Republicans to also back Mehmet Oz, the GOP Senate nominee in Pennsylvania, who was absent from the rally. “And that means not just Republican voters. It means Republican organizations in Pennsylvania and throughout the country need to be invested in this race. They need to devote resources to this race.”

A few hours later in Ohio, he praised Vance, a venture capitalist and the author of “Hillbilly Elegy,” as “somebody that’s going to be a leader and not just be a follower, and we need that in that swamp now more than ever.”

That DeSantis is viewed as a unifying force in the Trump-centric GOP is notable, given that the governor until now has rarely campaigned outside his home state. As DeSantis’ foray into the provinces beyond Florida further foreshadowed him as a presidential prospect, it also crystallized several realities for a Republican Party still largely Trump’s to command.

While Trump’s endorsement is influential, candidates like Mastriano and Vance reside more on the fringe of the GOP, delighting right-wing voters with their lies and conspiracy theories that the 2020 presidential election was rigged. DeSantis has largely avoided election-denying rhetoric, instead burnishing his conservative credentials with his largely hands-off leadership during the pandemic and his eagerness to make Florida a test lab for culture war legislation, such as an education bill that Democrats branded as anti-gay.

DeSantis straddles both sides of the Trump divide. He’s a legacy of Trump, whose endorsement propelled him in a 2018 primary for governor that he otherwise likely would have lost. But he’s also a bridge to a new era in which Trump-fatigued voters might want to move on.

“He’s arguably the second most popular Republican in America right now,” said Corry Bliss, a national GOP strategist who advised a Vance rival in Ohio’s Senate primary, adding that issues DeSantis has focused on in Florida “are key issues in races all across the country, especially governor’s races.”

DeSantis dwelled little on Trump in his Friday speeches, which for the most part stuck to a script. At both stops he complained that President Joe Biden has overturned many of Trump’s initiatives. He also briefly railed against the FBI’s search of Trump’s Mar-a-Lago resort last week in Florida. In between talking up his record as governor, he played up his local ties. His father is from the Pittsburgh area, his mother from Youngstown.

“If you threw a dart at the map of Florida, you would run into some Yinzers very quickly down there,” DeSantis said in Pittsburgh, using the famed local colloquialism.

DeSantis spent most of his time in both states talking up his handling of the pandemic, legislation he’s pursued to curtail what can be taught in schools and efforts to ferret out voter fraud in his state.

DeSantis also talked up his administration’s battle with Disney over legislation that limited how gender identity and sexual orientation can be discussed in school. He decried “gender ideology” and what he called a “a big euphemism, gender-affirming care for minors.” Mainstream health professionals say that care for transgender youth is essential to saving lives by reducing the already high levels of depression and suicide.

Polls have consistently established DeSantis as a clear second choice to Trump when Republican voters assess the 2024 presidential race. DeSantis also has pulled close to even with Trump in a couple of state polls in electoral battlegrounds, though Trump’s advantage across the map remains pronounced. And since last week’s FBI search, Trump is feeling more emboldened than ever about another run for president in 2024, NBC News reported Friday, with multiple sources saying Trump has reveled in recent surveys showing him widening a lead over DeSantis in a potential Republican primary.

Terry Sullivan, who ran Sen. Marco Rubio’s 2016 presidential campaign, said DeSantis’ rallies “are not about unity so much as they are about the beginning of the 2024 presidential race.”

“He’s played a smart game on the front end here of positioning himself as an alternative to Trump without being at odds with Trump,” he said. “And that’s smart and well done. It’s a fine line to walk.”

The candidates DeSantis rallied for Friday have so-far been heavily outspent by their Democratic opponents and have yet to experience the kind of polling surge one would expect in a year that should be favorable for Republicans.

On Thursday, a group aligned with Senate Republican leader Mitch McConnell announced it is buying $28 million worth of airtime to boost Vance — a buy that comes amid concerns about his strength in a GOP-leaning state. And Mastriano, who was outside the Capitol on Jan. 6 and led efforts to overturn Biden’s victory in Pennsylvania, has been branded by Democrats and some Republicans as too extreme to win this fall. He has been vastly out-raised by his Democratic rival, state Attorney General Josh Shapiro, who has seen his polling lead widen in recent weeks.

“They don’t want to talk about how hard it is for people like you and me to make ends meet,” Mastriano said Friday of Democrats. “So when they distract us with name-calling, you know, a hater, this or that. It’s just like, ‘Oh, shut up.’”

Ahead of Friday, a group of Jewish Democratic leaders in Florida condemned DeSantis for rallying alongside Mastriano, who came under fire for his ties to Gab, a social media site who’s founder has expressed antisemitic views. Later, Ammar Moussa, a Democratic National Committee spokesperson, chided DeSantis and the candidates he backs as “extreme.”

Jake Wilkins, a communications strategist and veteran of Republican campaigns who recently left the party to become a Democrat, cautioned that DeSantis could regret siding with some of the candidates.

“So far, DeSantis is largely getting a pass from establishment Republicans and the media for campaigning for extremist election deniers,” said Wilkins, who most recently worked for Sen. Ron Johnson, R-Wis. “That may be because they prefer him to Trump and understand he needs to build base support, but cozying up to more untested and extremist candidates may come back to haunt him.”

And DeSantis’ earlier Arizona stop showed how he and Trump are inextricably linked in the minds of top Republicans. The most attention-grabbing moment was an off-color comment from Lake, who remarked on DeSantis’ and Trump’s “BDE,” an acronym she told rallygoers to ask their children. She described it as “Big DeSantis Energy” — though the “D” traditionally stands for a slang description of male genitalia.

One Republican strategist working on multiple races deemed it unlikely that DeSantis could unseat Trump at the head of the GOP in 2024, though building these relationships will prove beneficial no matter what his future plans are.

“This is what DeSantis should be doing no matter what. Whether he’s going to run in 2024, 2028, 2032, whatever he ends up doing in his career down the road, he should absolutely be helping these candidates,” this person, who requested anonymity to speak candidly. “All in all, the candidates he’s helping are all the pro-Trump candidates that Trump had gotten behind.”

But it’s possible Trump is taking notice of the Florida governor’s growing ambitions.

Midway through DeSantis’ Pittsburgh address, Trump had an announcement. He, too, would soon campaign in Pennsylvania.