The incident happened at the Bergen County Championships in Old Tappan, United States, in May this year 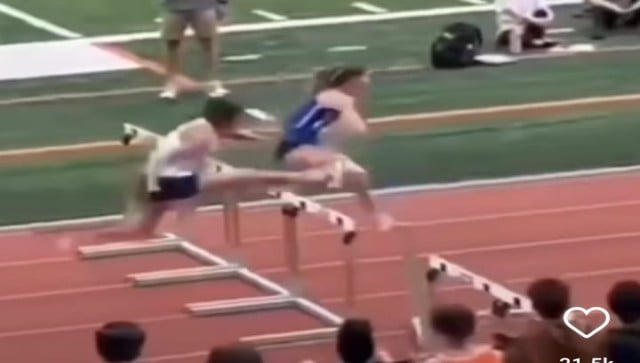 From not giving up hope till the last ball in a cricket match to snatching win from the clutches of the opposition. We have come across several examples of a never-give-up attitude from prominent sports personalities.

However, a video of a high-school girl has created a stir on social media. Her determined attitude and commitment to achieving the goal has been winning hearts across the internet.

The school girl, identified as Abigail Dennis of Old Tappan, participated in a high school sports event. And left the spectators amazed by her performance. She won a 100-meter hurdle race even after falling down at the initial stage.

A person sitting in the audience managed to capture the whole race in his lenses. And the video has become a prime example of a never-give-up attitude for social media users.

The incident happened at the Bergen County Championships in Old Tappan in May this year. The footage of the sprint has been shared by Good News Movement on their official Instagram page. Without any doubt, the spirit of the kid has been earning much praise from the viewers.

Dennis pulled off a fast start to the race. After smoothly clearing the first hurdle, she made a blunder. A misjudgment of the distance while leaping over the second hurdle led her to crash on it. Even after tumbling onto the track, Dennis immediately stood up and sprinted to the top of her speed.

She went past her fellow racers one by one. However, no one was ready for the stunning climax. She dashed over the remaining hurdles at ease and crossed the finishing line first.

The caption of the Instagram reel read, “GO, ABBY, GO! Despite falling toward the beginning of the race, Abby still finds it in her to win the race! It’s not over until it’s over.” Since being uploaded, the clip has garnered close to 8 lakh views so far. As many as 30,000 users have liked it. The comment section saw Dennis earning huge praise for her jaw-dropping comeback.

While one of the users termed it as “dash from the Incredibles”, another said, “This was so satisfying to watch.” The video sent “chills” down the spine of Instagram users, who weren’t tired of lauding the young lady. “Yo the perseverance in her is everything,” a third commented.

Previous articleKashayam for hair: Here’s how this Ayurvedic formula is significant in decreasing hair fall and hair breakage
Next articleCamilla greets crowd at Buckingham Palace following King Charles’ accession to the throne