Several people were injured, and security forces rescued a large number of people, including children, from the scene of the attack at Mogadishu’s Hayat Hotel 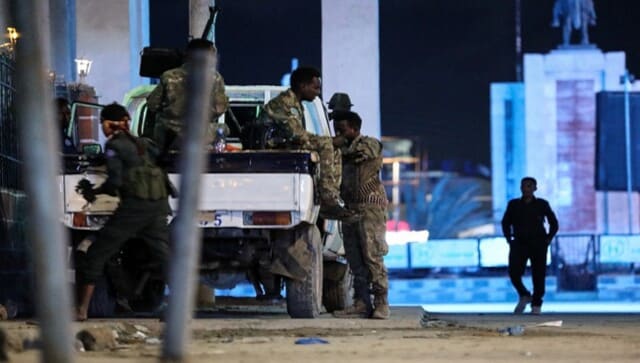 Security forces patrol near the Hayat Hotel after an attack by Al-Shabaab fighters in Mogadishu on 20 August, 2022. AFP

New Delhi: An official on Saturday said that at least ten civilians were killed in an attack by Islamist militants in a hotel in Mogadishu, Somalia’s capital, as security forces fought gunmen holed up inside.

According to the Associated Press, several people were injured, and security forces rescued a large number of people, including children, from the scene of the attack at Mogadishu’s Hayat Hotel.

The attack began with explosions outside the hotel before gunmen entered.

Early Saturday, gunfire could still be heard as security forces attempted to apprehend the last gunmen, who were believed to be holed up in the hotel. It was unclear how many militants remained on the top floor of the hotel.

It is the biggest attack in Mogadishu since Somalia’s new president, Hassan Sheikh Mohamud, was elected in May after months of political unrest.

The jihadist group, which has been fighting for 15 years against Somalia’s fragile central government, claimed responsibility.

Dozens of people gathered outside the hotel to learn the fate of loved ones who have been trapped inside.

“We were looking for a relative of mine who was trapped inside the hotel; she was confirmed dead along with six other people, two of whom I know,” witness Muudey Ali said.

According to AFP, witnesses said they heard at least two large explosions as the gunmen stormed the hotel, a popular hangout for government officials and ordinary Somalis alike.

An eyewitness Abdullahi Hussein told AP, “We were drinking tea near the hotel lobby when we heard the first explosion, which was followed by gunfire.” “I immediately ran to the ground floor hotel rooms and locked,”

“The militants immediately went upstairs and began shooting.” I remained inside the room until security forces arrived and rescued me,” he added.

On his way to safety, he said he saw “several bodies lying on the ground outside hotel reception.”

According to police spokesman Abdifatah Adan Hassan, the initial blast was caused by a suicide bomber who attacked the hotel with several other gunmen late Friday.

According to witnesses, a second explosion occurred just a few minutes later, injuring rescuers, members of the security forces, and civilians who rushed to the scene after the first explosion.

In a brief statement posted on a pro-Shabaab website, the militants claimed responsibility for the attack.

“A group of Al-Shabaab attackers forced their way into Hotel Hayat in Mogadishu, and the fighters are carrying out random shooting inside the hotel,” the group said.

Earlier this week, the US announced that it had killed 13 Al-Shabaab fighters in an air strike in the country’s central-southern region while the Islamist militants were attacking Somali forces.

In recent weeks, the US has conducted several air raids on militants.

President Joe Biden ordered the re-establishment of a US troop presence in Somalia in May to assist local authorities in combating Al-Shabaab, reversing his predecessor Donald Trump’s decision to withdraw most US forces.

Last month, Somalia’s new president, Mohamud, stated that defeating Al-insurgency Shabaab’s would necessitate more than a military approach, but that his government would negotiate with the group only when the time was right.

An African Union force drove Al-Shabaab fighters out of the capital in 2011, but the group still controls large areas of the countryside.