King Charles III said that his heir William and his wife Kate have become the new Prince and Princess of Wales. He also expressed his love for Prince Harry & his wife Meghan Markle ‘who continue to build their lives overseas’ 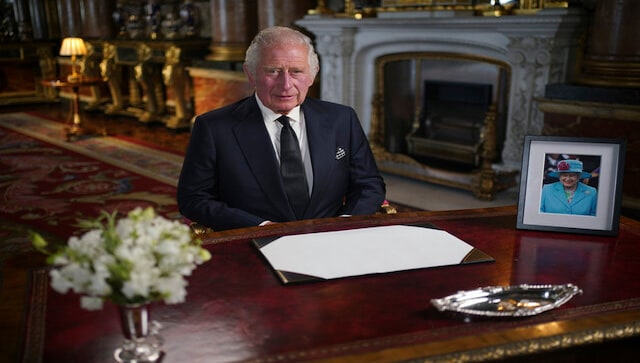 Britain’s King Charles III delivers his address to the nation and the Commonwealth from Buckingham Palace, London, Friday, Sept. 9, 2022, following the death of Queen Elizabeth II on Thursday. AP

New Delhi: In his first address to the UK as monarch on Friday, King Charles III vowed to “uphold constitutional principles’ for the rest of his life.”

“The role and the duties of Monarchy also remain, as does the Sovereign’s particular relationship and responsibility towards the Church of England – the Church in which my own faith is so deeply rooted,” he said in a televised address.

“In that faith, and the values it inspires, I have been brought up to cherish a sense of duty to others, and to hold in the greatest respect the precious traditions, freedoms and responsibilities of our unique history and our system of parliamentary government,” he added.

King Charles said that his mother Queen Elizabeth II’s dedication and devotion “as a sovereign never waivered” with changing times during her seventy-year long reign.

Also read: Long Live the King: How different will Charles be from his mother Queen Elizabeth II?

The Queen was UK’s longest-serving monarch.

“In her life of service we saw that abiding love of tradition, together with that fearless embrace of progress, which make us great as Nations. The affection, admiration and respect she inspired became the hallmark of her reign,” he said.

He also paid a tribute to his late father Prince Philip.

“And to my darling Mama, as you begin your last great journey to join my dear late Papa, I want simply to say this: thank you,” he said.

He said that William and his wife Kate have become the new Prince and Princess of Wales.

For his younger son Prince Harry and his wife Meghan Markle who reliquished their title as senior royals, Charles said that he “wants to express his love for the couple as they continue to build their lives overseas.”

Earlier in the day, King Charles and his wife Queen Consort Camilla well-wishers as they arrived at Buckingham Palace in London.

Charles became the King immediately after his mother’s demise on 8 September. His formal coronation will take place on Sunday.