A short video of an ecstatic Afghan man kissing the TV image of Hardik Pandya, as he walks back after the victory against arch-rivals Pakistan, has gone viral 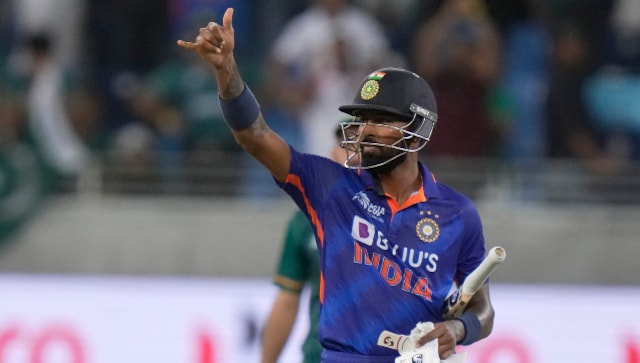 Hardik Pandya gestures after guiding India to a five-wicket victory over Pakistan in their opening game of the 2022 Asia Cup on Sunday, 28 August. AP

For those of us who are old enough to remember that day in 1986, Javed Miandad’s six off the last ball of the match from Chetan Sharma remains seared in the mind. Pakistan needed four runs to win the Austral-Asia Cup. Miandad correctly guessed that Sharma would try to bowl a yorker, so he took his stance slightly ahead of the crease, thus transforming the attempted yorker into a nice full toss that could be lifted over the mid-wicket boundary.

Sharma, who is now head of the BCCI’s selection committee, may have got some much-overdue satisfaction on Sunday when in the India-Pakistan T20 Asia Cup match, Hardik Pandya hoicked Mohammad Nawaz in similar fashion in the last over to win the game.

Pandya, like Miandad, knows no fear. He represents a new breed of Indian cricketers for whom defeat is not an option. Just five weeks ago, he and Rishabh Pant, both of whom were born many years after Sharma bowled that failed yorker, won the last one-day international — and the series — against England at Old Trafford after all seemed lost for India with four wickets gone quickly.

It will be entirely dishonest to claim that an India-Pakistan match is just another game of cricket. We have fought four wars and Pakistan has sponsored terrorism and low-intensity warfare on Indian territory for decades. Every time the two teams play each other, there is higher pressure on the cricketers than when they play Australia or the West Indies. So Pandya’s six carries an extra significance, just as Miandad’s did. Hotstar reported its highest ever viewership for any cricket match and there were wild celebrations by Indians all over the world when their team won.

But the most popular tweet came from an Afghan. As I write this, 20 hours after the tweet was posted, it has been liked by more than 73,000 people and retweeted about 12,000 times. The tweet, from Yousafzai Anayat, who claims to be a “human rights defender and women’s rights activist”, reads: “Congratulations to all our brothers. Indians and Afghans. We the people Afghanistan celebrating this victory with or (sic) friend country Indian people.” It has a short video of an ecstatic Afghan man kissing the TV image of Pandya as he walks back after the victory.

I visited Kabul in 2002, a few months after the US and its allies had liberated Afghanistan from the Taliban. It was quite astonishing to see the love that common Afghans had for Indians. India was contributing heavily in cash and kind to rebuilding the country and was viewed as Afghanistan’s most trustworthy friend. When my colleague and I were surprised by the surly service at a restaurant we had gone to for lunch and complained to the owner, he told us brusquely, ‘No service for Pakistanis.’ But we are Indians, we protested. The demeanour of every restaurant staffer changed instantly. ‘Zero service for Pakistanis and double price,’ we were told. ‘Indians, full service and half price.’ It was only after a great deal of insistence on our part that the owner accepted full payment of our bill.

The Taliban had banned music during their regressive reign. Now every Kabul street — and every cab we rode in — blared songs from Hindi films. Cinema halls had opened again after many years, and of course it was Hindi films that were playing there. Whenever someone figured out that we were Indian, they would shake our hands, or gleefully shout: ‘Shilpa Shetty! Amitabh Bachchan!’ The most heart-warming moment for me was when I was walking by a school just as classes ended, and dozens of little girls, their faces glowing with joy, chattering happily, came running out on their way home. I dread to even imagine what the state of those girls — and their daughters — are in today’s Afghanistan. What was, even in the early 1980s, one of the most liberal and progressive societies in the Muslim world, has been banished again into the dark ages.

In 2002 Kabul, every free stretch of land had been converted by the boys into a cricket field. Except that all the young bowlers were chucking. I tried to teach one of them the correct over-arm action, but failed. Today, the Afghanistan cricket team, though made up wholly of non-residents, is a pleasure to watch for their spirit and free-flowing style of play. That is why it was so frustrating to watch it snatch defeat from the jaws of victory at the last moment against Pakistan in the 2019 World Cup due to just one illogical bowling change. Things will surely get better as the players gather more experience. Rashid Khan, only 23 years old, has already become the joint-fastest spinner to take 100 wickets in the Indian Premier League.

America’s hasty withdrawal from Afghanistan last year was a shameful surrender. It is difficult for us to visualise the life of an ordinary Afghan today — and more so, an Afghan woman. America has moved on and the world too seems to have lost interest in a never-ending tragedy. Recently, India decided to re-open its Embassy in Kabul and the Taliban have even asked New Delhi to complete the development projects that it had been financing.

External Affairs Minister S Jaishankar has said that India will provide humanitarian and medical assistance to the Afghan people. They certainly need help, but India’s aid will have no effect on the Taliban’s ideology or worldview. The cabinet of the Islamic Emirate of Afghanistan is a collection of jihadist terrorists, including Sirajuddin Haqqani, leader of the ruthless Haqqani network who carries a $10-million US government bounty on his head, and is now in charge of the country’s internal security.

On 1 August, a US drone killed Al-Qaeda leader Ayman al-Zawahiri, who was holed up in central Kabul, proof that the Taliban continue to shelter the worst threats to a peaceful world. As long as the Taliban are in power — and it looks like that will be a very long time indeed — Afghanistan will remain a breeding ground for international terrorism and drug trafficking. Last month, the Taliban’s emir Mullah Haibatullah Akhundzada explicitly said so, tweeting: “The infidels were at war against us due to our ideology, jihad, and Sharia. This war never ends, and it will continue till Judgement Day.”

Yes, the worst sufferers from all this will be the common Afghan people. Helping save them from starvation and pestilence is undoubtedly the humane thing to do, but it will not make the Taliban any less dangerous to the world, and to India. When that Afghan man skipped up to the TV and kissed Hardik Pandya on the screen, he was in fact doing something heroic, something that could put his life in danger. All Indians should salute this man back.

The writer is a former editor of ‘Financial Express’, and founder-editor of ‘Open’ and ‘Swarajya’ magazines. Views expressed are personal.