The video has been viewed almost 10,000 times since it was shared. Additionally, a variety of comments have been made regarding the adorable incident 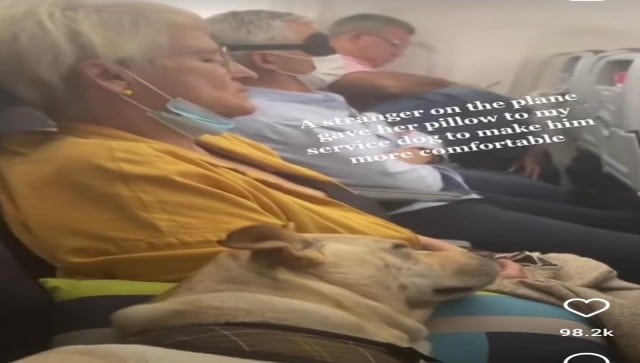 Stranger gives her pillow to service dog on flight. Instagram/dogsofinstagram

People frequently feel joyful after reading stories about strangers indulging in acts of kindness. The internet is full of such heart-warming stories and when they involve an animal, it touches hearts almost instantly.

A recent video, which went viral, narrates a similar tale of a woman whose act of kindness towards a dog left the dog’s owner pleasantly surprised and grateful. The video, taken on an airplane, was shot by the owner and later shared by a popular Instagram handle called Dogs of Instagram.

A dog is shown in the video sleeping soundly next to a woman while perched on a pillow. According to the text added to the video, a passenger made the service dog more comfortable by giving him her cushion to rest its head on.

The clip has won hearts since it was shared some days ago. The video has been viewed almost 10,000 times since it was shared. Additionally, a variety of comments have been made regarding the adorable incident. An Instagram user said, “This is very wonderful.” You two are now sharing this dog. Joint custody,” said a different. Another responded, “I’d pay more to sit next to someone who would let me pet their service dog.” “My heart just exploded. I would have done exactly what she did. Doggy needs to be comfortable, and I want a lot of snugs,” someone else wrote. Well, this is just the kind of video that would make you grin from ear to ear and totally make your weekend. And, there are scores of them on the internet. It was just a few days back that a video of a service dog pushing his owner’s wheelchair across the street, while they patiently waited for oncoming traffic, went viral.

It was uploaded on 4 August and melted people’s hearts right away.

Previous articleMultiple sets of remains found in receding Lake Mead. Here’s a timeline of the discoveries.
Next articleBest Bhojpuri celeb’s pics of the week